I try to sit down every day to write in my blog and had great topics about the peacemaking center planned in Ireland or the release of The Ken Burns’ documentary The  Central Park 5. I was even going to write about an uplifting session I just had with a local parish wanting to diversify its congregation and get involved with social justice. However I just can’t seem to proceed until I write something of my thoughts about the Boston Marathon Bombings and my experience there. 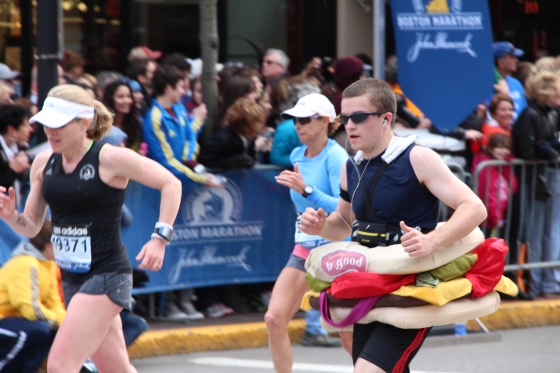 On Monday the 15th I had been in class and lectures all day so it was closer to 1:30 when I got to the finish line of the Marathon just across from the grand stand. People were calling out to loved ones and encouraging others they didn’t know to the finish line. It was lovely with the flags waving in the air from countries all over the world. I soaked up that amazing atmosphere you get at unique events like this where people have worked hard to achieve something so personal, so physical. I couldn’t help but have a huge smile on my face. I was so happy I had decided to join everyone. However with all the people and flags I couldn’t see the runners very well so I walked down Boylston street a bit stopping in a space that looked free and clear of obstructions with a closer spot to the edge. I nestled my way in and checked my watch. It was 2:30 and I had plenty of time to take some more photos before heading back to do more work.  I was trying to catch the colorful and enthusiastic runners with costumes. I saw at least 2 runners wearing hamburgers. One guy had a beer floating out in front of him on a pole urging him towards his reward. Kings, gladiators and sparkly fairies drifted by my camera with smiles or with focused attention as they struggled towards the finish line. I was happily snapping away when I felt the first bomb go off like a shock wave through my body. I dropped my lens cap and the second sensation was a nasty smell. It was then that I turned to see the smoke just in time to feel the second bomb go off on my right. I turned to look at the new plume of smoke expanding out and moved to take in both billowing clouds. I knew they were bombs. Were there more? Would they go off right here in front of me? Which way should I run? Were people going to panic and trample us all? Should I take more pictures? Where’s my lens cap? 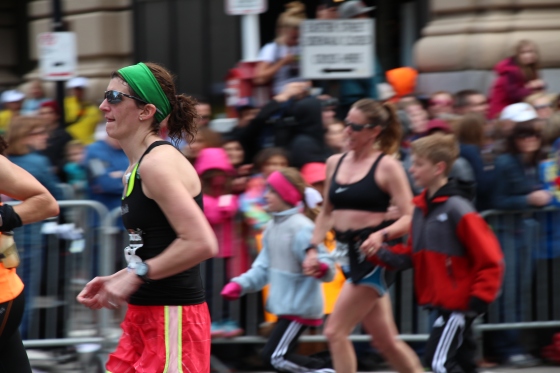 These thoughts were running through my shocked mind until I heard the woman saying to her daughters next to me that we should run. Only then was I able to move.  I started jogging down Exeter Street. A woman next to me held her little girl in her arms whispering to her that it would be OK. I nearly tripped them as I tried to get around a light pole. I apologized and placed my hand on the woman’s back to comfort her as she comforted her daughter. I realized I needed to pay more attention to where I was going but as soon as I looked up I saw a woman with blood on her face being carried on either side by two men taking her to safety. Just after her was a woman was being held back by her boyfriend or husband as she tried to run into the smoke to find her brother. He wouldn’t let her go trying to convince her there might be more bombs. She kept fighting him anyway. I picked up my pace after this getting to Commonwealth Avenue where I stopped and was confused as police cars, ambulance and fire trucks started pouring in knocking down barricades to get to the smoke. I called my roommate and sister thinking logically that someone should know I was there in case something happened to me. It was only then that I realized before I had moved to avoid the flags I had been standing in front of the place where the first bomb went off. ( It was days later that a friend told me I was lucky I had also stopped short of the second one.) Lucky doesn’t even begin to capture what I felt.  I was however still in shock. I only started to cry when I heard my sister’s voice mail pick up and left a slightly hysterical message saying I was OK.

All around me people were crying, asking questions and trying to find their way home. I felt lucky to know where I was going and fell into line with others walking along the river to get to the Massachusetts Avenue bridge. My roommate met me halfway with a tea to calm my nerves and I went home to digest what has happened as I still do.

Being a big believer in restorative justice I think every day about the bombers and want to know why they did it. I also wonder if I had been injured or lost a loved one would I want a restorative process to occur. Would I want to sit down with the bombers and ask them why they did what they did as I do now? I do not feel like a real victim in this situation so I just can’t say. What I do know is that healing dialogue between the living victims and living perpetrator probably won’t happen for anyone even if they want it. If we had the desire and legal system to support this where would we even go to do it? How would we structure a session like this with 1 remaining perpetrator and hundreds of victims who may want to participate? There is no social or physical infrastructure that allows for this kind of justice on a mass scale in our country. I hope that one day there will be.

For now I have placed some of my pictures in this blog to try and honor the spirit of this great event and hope that some healing will follow for all of us in whatever way it can.

2 thoughts on “The Boston Marathon”