Throughout the year I have been having experiences that have me thinking about the capacity of the design process itself to heal. There are two that stand out to me that I would like to share. 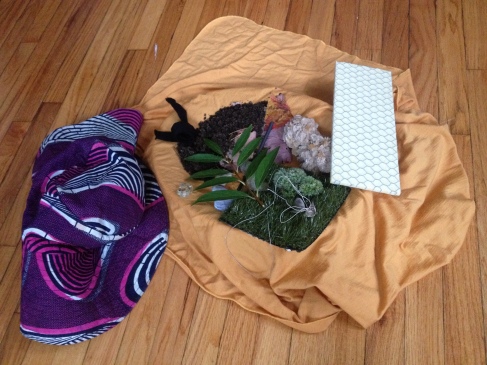 The first was when earlier this year I ran a seminar with the Loeb fellows testing a new process I developed for community engagement. It is called the Peace Making Pallet and it is based on the traditions of Native American Peacemaking Circles and my early training as a circle keeper. I ask members of a given community to bring an object, material, texture color they are drawn to. Once I open the circle with the parameters of confidentiality I ask each person to act as an elder and tell a story associated with the content they have brought.  It is an amazing thing to watch people share intimacies through materiality. The objects provide both emotional safety and a doorway through which people feel comfortable to share more intimate experiences of space. Their stories are rich with content for a designer like me looking to imbibe the spaces of peacemaking with the rich cultural legacies of a given community. It was the first time I have experienced using design as a tool for connection, expression and psychological discovery. 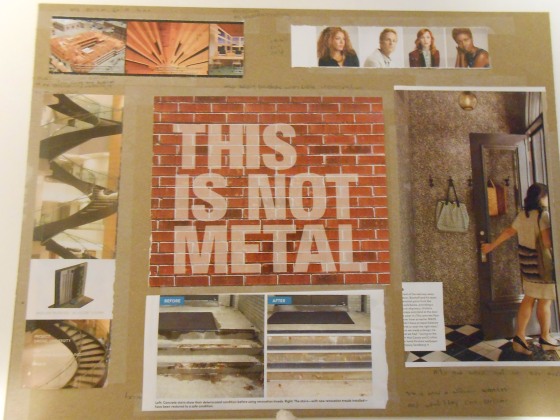 A second experiences was when I went to teach at the state penal institution. We sat in circle together and I asked the students what jumped out at them from the readings we gave regarding their personal or perceived experience of the courthouse( Frank Greene-The Image of the Courthouse, Steve Bogira Courtroom 302, Restorative Justice Design-Deanna Van Buren). The inside students were quick to raise their hands to speak about the shame they felt and  the perceived judgments as they walked the crowded halls of the courthouse in handcuffs after being squeezed through the security and dingy back entries for the accused. They spoke about the way their hearts sank into their stomach as they rode the long elevator ride to the top floor where the more serious crimes were heard and into a courtroom where the judge sat high on his dais knowing that there was no way out. It was an intense circle to facilitate and the fist time I had ever taught in this style. While the outside students had less experience and charge around the content they also spoke about their feelings triggered by grim and depressing environments in Courtroom 302 and the film they had watched “Beyond Conviction”. When discussing the need for restorative space the students spoke about the necessity to have views to outside, the desire to have a table between or no table in victim offender mediation. What size should it be? What shape? One powerful image was invoked by an incarcerated student who suggested there should be a confessional booth to shield the victim from the perpetrator before coming in to full view of each other. As always I was amazed by the powerful insights people have into space when given the language and tools to speak about it.

After this we went into creating collages that were to represent a restorative space for a victim, offender or the community, the great triad of the restorative process. It was quite a scene to watch the students gathered in mixed groups huddled over the few magazines we were allowed to bring in and the rulers we made out of chipboard to meet prison security in order to tear the images out of them.

I walked around trying to support the students and saw one inside man, looking distressed. He said he was done but his collage had only a few images. He explained he had been assigned to create a restorative space for a victim. He showed images of people alone, isolated, aging and afraid. He said this represented the experience of the victim and his family who were suffering now that he was in prison. I asked him if there was a way to think about a space that would support them and he said this was not possible. I asked if there was something that could be changed in the space of his family’s home to perhaps heal and restore some of what was lost. He said “no, they just need me back there”. I felt a little helpless but suggested that he might then want to show pictures of families that would represent this restorative reunion. He looked hopeful and all the students helped find him images of families. When I came back around his board had some new images. Families, fathers and sons even a richly textured image of owls huddled together. He was smiling. As we finished up I started to see other collages and the impact they were having on the students as they expressed themselves through images of peoples, space and material. It was not unlike the experience I had with The Peacemaking Pallet. 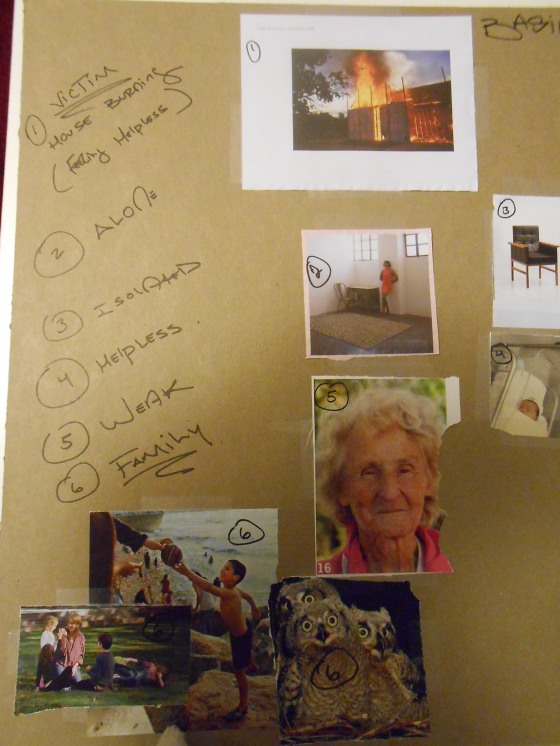 One my way back to Boston I started to think that while art therapy had been used across a broad spectrum of disciplines was there anyone using design as therapy. Could the processes and tools designers use every day be a way to access emotions and restore healing? To be honest I am not yet sure but I am inspired by the two experiences I described and the words of an incarcerated woman in her mid-50s, Belinda, who my co-teacher Barb Toews interviewed for her dissertation research. When asked to create space to represent self-forgiveness she was seeking Belinda selected a magazine photo of a beautiful backyard garden, propped it up like a window wall and stated:

“If the time of self-forgiveness ever comes, I believe it will look like this. I am in my house, content and feeling free. This backyard is like my “serenity place.” I would walk out there, thank God for my life and for overcoming my obstacles and for what I held on to for far too long.” 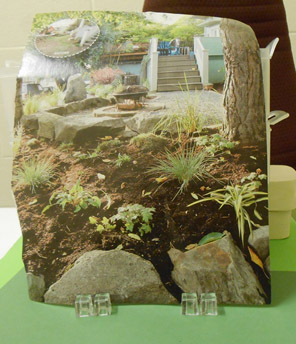